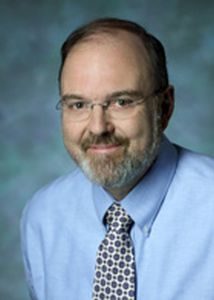 Dr. Raymond Koehler is a professor of anesthesiology and critical care medicine at the Johns Hopkins University School of Medicine. He holds a joint appointment in the Department of Environmental Health Sciences at the Bloomberg School of Public Health at Johns Hopkins.

His research focuses on cerebrovascular physiology and cerebral ischemic injury that arises from stroke and cardiac arrest.

Dr. Koehler received a combined B.S./M.E. in electrical engineering from Rensselaer Polytechnic Institute, and went on to complete a Ph.D. in physiology at the State University of New York at Buffalo. After completing a fellowship in the Department of Environmental Health Sciences at Johns Hopkins, he joined the Johns Hopkins faculty in 1980 as an assistant professor of anesthesiology and critical care medicine. He became an associate professor in 1986 and rose to professor in 1996.

Dr. Koehler has published extensively and has presented his work internationally at numerous conferences and symposia. He sits on the editorial board of the journal Stroke and is a member of American Physiological Society, the American Heart Association, the International Society of Cerebral Blood Flow and Metabolism, the Society for Neuroscience and the Society of Critical Care Medicine.

Dr. Koehler and his team are conducting basic and preclinical translational research in the areas of cerebrovascular physiology and cerebral ischemic injury that arises from stroke and cardiac arrest. They use the filament model of transient middle cerebral artery occlusion to investigate physiologic and pathophysiologic mechanisms that underlie stroke. It is already known that the formation of reactive oxygen species after stroke damages DNA, which leads to the activation of poly(ADP-ribose) and formation of poly(ADP-ribose) polymers. Together with the laboratory of Valina and Ted Dawson (in the Institute of Cell Engineering at Hopkins), Dr. Koehler and his colleagues are investigating how release of these polymers from the nucleus triggers the release of apoptosis-inducing factor from the mitochondria and causes neuronal cell death. Techniques include protein analysis of subcellular fractions, immunohistochemistry, and histology. Screening of small molecular inhibitors may reveal potential therapies for acute treatment of stroke.

A second area of investigation in ischemic stroke is ischemic preconditioning. Specific transcription factors and proteins are upregulated by a brief period of cerebral ischemia. The role of some of these factors and proteins in producing tolerance to a subsequent experimental stroke is being evaluated in mice with gene-deletion strategies. These proteins could represent therapeutic targets for stroke.

Dr. Koehler is also exploring ways to improve tissue oxygenation. One approach is to enhance cerebral vasodilation of collateral arteries to increase perfusion in the ischemic border region. Although ischemia produces vasodilation, the response is not sustained when ischemia is prolonged over a period of several hours. The mechanisms involved in the loss of vasodilatation are being assessed to develop rational pharmacologic approaches for the early treatment of stroke. Another approach is to use hemoglobin-based oxygen carriers. These cell-free hemoglobin molecules are designed not to leach out or cause renal damage. By increasing oxygen solubility in the plasma, these hemoglobin molecules facilitate oxygen transport from red cells through the plasma to release oxygen into hypoxic tissue. These plasma-based hemoglobins also can perfuse capillaries more homogeneously than can red blood cells under ischemic conditions. Exchange transfusion of hemoglobin solutions is capable of decreasing infarct volume from ischemic stroke. Efficacy of using hemoglobin solutions as a method for resuscitation from hemorrhagic shock is also being evaluated. Experimental techniques include regional blood flow measurements and visualization of pial arterioles by intravital microscopy through cranial windows in experimental models of middle cerebral artery occlusion and hemorrhagic shock.

In a related research area, Dr. Koehler and his team are studying mechanisms of abnormal cerebrovascular reactivity after ischemia. In collaboration with Marguerite Kearney in the school of Nursing, they are researching the role of sex hormones and hormone-replacement therapy in preserving reactivity of pial arterioles after ischemia/reperfusion. Some of the preclinical models they are using include the four-vessel occlusion model of forebrain ischemia, intravital microscopy of pial arterioles, ovariectomy, and isolation of cerebral microvessels for assessing protein expression.

In addition to ischemic stroke, mechanisms of term neonatal hypoxic-ischemic encephalopathy are being studied in a newborn model of asphyxia. Therapies are being tailored to selectively vulnerable striatum, where neurons die rapidly and hypothermia loses its efficacy when induction is delayed. Drugs that can be administered soon after resuscitation from asphyxia are being evaluated for their potential to extend the therapeutic window of hypothermia. These drugs include those directed at dopamine receptors, adenosine receptors, 20-HETE synthesis from arachidonic acid, acid-sensitive ion channels, sigma receptors, and antioxidants. To study the effects of the drugs, Dr. Koehler’s team uses histopathology and measures changes in the phosphorylation level of NMDA receptors and Na,K-ATPase, various markers of oxidative stress, and cerebral blood flow.

Dr. Koehler also hopes to unravel the mechanisms that couple an increase in cerebral blood flow to neuronal activity. Because neurons do not directly contact cerebral arterioles, recent work has focused on how astrocytes might act as intermediaries to integrate neuronal activity and transmit that information to adjacent arterioles. Dr. Koehler’s lab is focusing on epoxyeicosatrienoic acids (EETs), which are cytochrome P450 metabolites of arachidonic acid synthesized in astrocytes and capable of producing vasodilation. Model systems include physiologic sensory activation and monitoring of cortical blood flow by laser-Doppler flowmetry.